This year's "Pie in the Eye" event raised nearly $1,353.00 for Dubois County Relay for Life. It was, by far, the most successful fundraiser in its nine-year history. Third place went to two lucky Associates. Alex Ernst received a pie from last year’s top recipient, Dave Sutton. Chris "Rocky" Arvin earned a “matching” third place pie, and it was thrown by TJ Abrams. 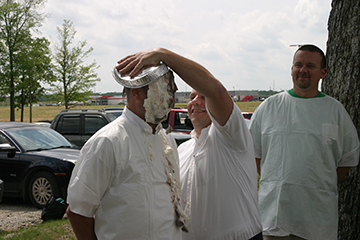 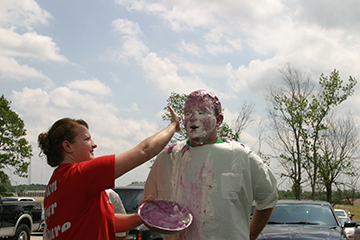 The second place pie was given to Jeremie Elliot, who was a willing participant, even raising money for himself. Jeremie raffled off the chance for an Associate to throw his pie, which was won by Teresa Kortea. 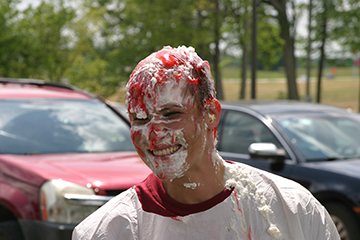 This year's top recipient was Nicole Tanner from the ITD division.

Associates from Indiana Tool & Die held several fundraisers to make sure their candidate, Nicole Tanner, got her just desserts. Their efforts once again paid off as Nicole had $505.50 raised against her, to be this year’s top recipient. “It’s definitely the most fun event we do at JASPER,” said Cori Wilson, event coordinator. “If it weren’t for these Associates donating their faces for us to throw pies at, we couldn’t have done it.” “We know how fortunate we are, as a company, to be able to do these crazy events,” she added. “We’re Doing It Right AND Having Fun!