JASPER's over 2000 Associates and 44 branch and distributor locations are committed to providing you with the perfect product. Our processes and procedures are designed to produce a quality component that will meet or exceed the expectations of every one of our customers.

And, we back up that commitment with a 3 year/100,000 mile warranty on our gas engines, transmissions and differentials. That means you can have confidence in your vehicle's performance for years to come, and confidence in JASPER for life. Click here for a full warranty disclosure and coverage on our entire product line.

What began as one man's insight has evolved into a 100% Associate Owned company with an ongoing commitment to quality making JASPER the largest, strongest mass-remanufacturer in the world.

JASPER Engines & Transmissions was founded in 1942 through the vision of Alvin C. Ruxer who at the time was the operator of a successful Ford dealership. Up to 1942, the Ford agency had seen uninterrupted growth.

However, with the outbreak of the Second World War, new cars became less available as factories turned their resources toward munitions and war materials. It was then that Alvin Ruxer began rebuilding gasoline engines to extend the life of present vehicles and provide another channel of income. This new operation originated in the 12 x 20 ft. wash rack of the Ford dealership and marked the beginning of what would become JASPER Engines & Transmissions.

After the war ended, JASPER saw a continued need for replacement engines. In 1946, the company made two decisions that would influence the quality and continued acceptance of its product. The first was to remanufacture "by the book" to manufacturer's specifications.

The second was to install a standard set of new parts. These two laws are the cornerstone that has allowed the company to achieve its level of success.

In 1951, a new building was constructed on the east side of town to accommodate the growing engine operation. This building is shown to the right.

In the years that followed, JASPER began delivering their products to customers by pick-up truck. As orders grew, they worked up to the purchase of their first tractor trailer which was operated by Othmar Schepers.

The picture below was taken from inside the new JASPER Engine Exchange building and proudly displays one of industry's early aids in production, the roller conveyor.

As JASPER continued to grow, it became obvious that the engine was not the only component that held potential for remanufacturing. So, the next logical move was to step into the transmission business in 1957.

Indiana Tool and Die was acquired in 1959 to remanufacture torque converters, complementing the transmission line. Prior to this, many intricate and delicate parts were farmed out to other companies for exact tooling requirements. Production and shipping costs as well as other inconveniences made it difficult to build engines and transmissions on a competitive scale.

As both the engine and transmission businesses grew in strength and number, it became increasingly apparent they should be housed under one roof. In 1965, both operations were brought together in a new and larger building that would accommodate future expansion. This site is JASPER's present location on Hwy. 231 South, which is now known as 815 Wernsing Road.

The original 75,000 sq. ft. facility housed all of the remanufacturing and machine shop operations, as well as the offices. At that time, JASPER produced 1,200 gasoline engines and 500 transmissions each month.

When JASPER first started diesel remanufacturing on a production line basis in February of 1968, plans were to build at least six engines the first year. However, 16 diesels were completely remanufactured at the JASPER factory during the first 12 months! Included in the new addition was a diesel service and installation department. This service was added to save diesel operators thousands of dollars in downtime.

Increased demand for JASPER factory exchange diesel engines and the need for every inch of available space prompted JASPER to begin construction of a 22,200 sq. ft. addition to their factory.

As part of this new addition, a special fuel room, predecessor to the present air conditioned and dust-free Fuel Department, was built to handle the delicate remanufacturing and testing of fuel injection systems and pumps.

In 1976, JASPER began the production of exchange differential assemblies for heavy duty trucks. This division was established to provide exchange replacement as well as a readily available stock of all types of differentials.

In 1987, Alvin Ruxer sold his company to the existing management team. Looking toward its future, JASPER empowered its Associates to implement the company's philosophy of a continuous improvement in safety, quality, productivity and customer service. A reduction in waste was formally added to this philosophy in 2008. During the same year, JASPER organized its Marine Division to remanufacture inboard and I/O engines and stern drives. That product line would later be expanded to include outboard lower units and outboard powerheads. The JASPER Electric Motors Division was also started to expand the company's capabilities into motor rewinding and repair.

JASPER entered the racing arena in 1989 when it sponsored Ken Ragan in three (what was then) Winston Cup races. Throughout the years, the company sponsored a number of drivers and fielded a number of paint schemes.

Today, JASPER's focus is on building transmissions and differentials for a number of full time NASCAR Sprint Cup and Nationwide Series teams.

JASPER stayed on the performance "track" in 1989 launching its Performance Division in order to build engines and transmissions for street, strip and circle track applications.

Today, JASPER is the nation's leading remanufacturer of a diverse line of drivetrain components. Annual production includes over 150,000 gas and diesel engines, transmissions, differentials and rear axle assemblies. The facility built in 1965 has undergone 10 expansions over the years.

JASPER personnel have been named Remanufacturer of the Year an unprecedented three times by PERA, The Production Engine Remanufacturers Association, an international organization of the company's peers. 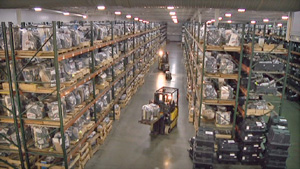 JASPER Engines & Transmissions employs over 2800 Associates, and our products are distributed through a network of 45 branch and distributor locations throughout the United States.

Our mission statement is simple: "Do It Right and Have Fun!" We are committed to remain a leading force in the automotive industry. Progressive programs of research and new product development enable us to provide quality value-oriented products second to none.