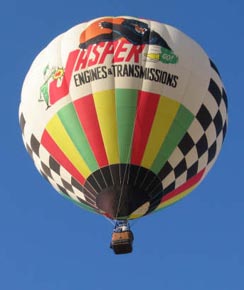 Hot air balloons are at the mercy of the winds, so it is only flown when the surface winds are ten miles an hour or less. The balloon is flown the first two hours after sunrise and the last two hours before sunset to avoid thermal heating during the midday hours.

The JASPER Balloon competes at races designed to test the balloon and pilot skills. We compete at both the local and national levels. The pilot, Warren D. Smith is a commercially rated pilot with ratings in fixed wing and seaplane aircraft as well as lighter than air. Warren won Rookie of the Year honors at the 2004 United States Hot Air Balloon National Championships sanctioned by The Balloon Federation Of America.

The Jasper Engines Balloon may also participate in other flights and events.
Dates are based on previous years events and may need to be adjusted.