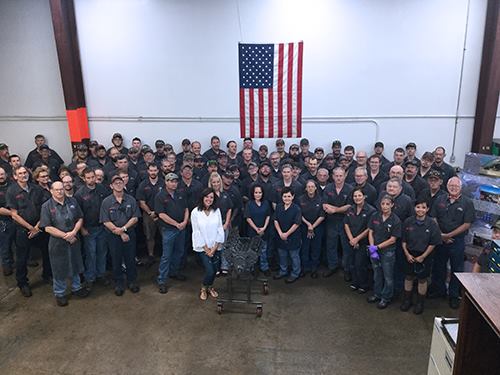 Ginger Ravella, a Folds of Honor recipient, recently posed with a JASPER® remanufactured Chevy 350 engine, and the JASPER Associates who produced it at our Willow Springs, MO facility.

This is their story...

Major Troy “Trojan” Gilbert, U.S. Air Force, age 34, was killed in action while flying a combat mission in Anbar Province, Iraq, on Nov. 27, 2006, in support of Operation Iraqi Freedom. Major Gilbert saved 22 Special Forces soldiers the day he lost his life. He left behind a wife and five young children.

Since 2007, Folds of Honor has carried forth this singular, noble mission: To provide educational scholarships to the spouses and children of America’s fallen and disabled service-members. Our motto says it best "Honor their Sacrifice. Educate their Legacy." Major Gilbert’s children were some of the first recipients to receive scholarships. Ten years after his death, they are all thriving in a private Christian school in San Antonio. The oldest attends Southern Methodist University in Dallas, TX.

Major Gilbert’s widow, Ginger, is an international motivational speaker. She shares her family’s testimony of loss, faith and patriotism. Through Folds of Honor, she and her family met award-winning country music artist, Lee Brice. They connected over his number-one chart hit “I Drive Your Truck”.

Through Lee Brice, his manager, friends and Ginger’s new husband, Colonel Jim Ravella (a widower himself), Major Gilbert’s old pick-up truck was found in Arizona, and brought back to the family after 10 years. It was given to Ginger and her children live last year at the ACM’s (Academy of Country Music) Party for a Cause in Las Vegas. Iron Cross Automotive out of Tulsa, OK worked to restore, refurbish and transform the old truck. Jasper Engines and Transmissions and Seymour’s Garage of San Antonio and have teamed up to fully restore the drivetrain for the family.

Major Gilbert’s children will enjoy the third-generation 1992 Chevy Silverado 1500 for many many years to come thanks to patriotic Americans who are thankful for the sacrifice the Gilbert family has made in defense of this great nation.