JASPER® Earns ESOP Company of the Year Honors for 2018

Jasper Engines & Transmissions has been named ESOP Company of the Year for 2018 by The ESOP Association, Indiana Chapter.  The announcement was made February 27th at an Association conference in Carmel, Indiana.

“We are truly honored to receive this award,” said Doug Bawel, JASPER Chairman/CEO.  “We have 2,900 Associate-Owners who are very proud of their 75-year company, and this recognition is all about them.”

The ESOP Association is the largest employer-sponsored advocacy and education association in the United States.  The Association focuses on employee stock ownership plans (ESOP). Founded in 1978, the Association seeks to enhance federal laws governing ESOPs, provide members with expert information, and fund research via the Employee Ownership Foundation.

The ESOP Association is a national non-profit organization with 18 local Chapters, including Indiana.  Its members include ESOP companies, companies considering an ESOP, and service providers that assist in setting up and maintaining ESOPs.

JASPER has seen immense growth since the inception of the ESOP in 2009. In 2010 the company had grown to approximately $280 million in revenue, and approximately 1,800 Associates nationwide.  In the last six years, JASPER conducted strategic acquisitions within the automotive industry that  allowed the company to grow and prosper.  JASPER also expanded its remanufacturing facilities in Jasper and Leavenworth, Indiana, as well as Willow Springs, Missouri.

“We will be announcing our current share price in April, and we are excited about our 2017 growth and success, which we feel will reflect in our stock price,” said Bawel. 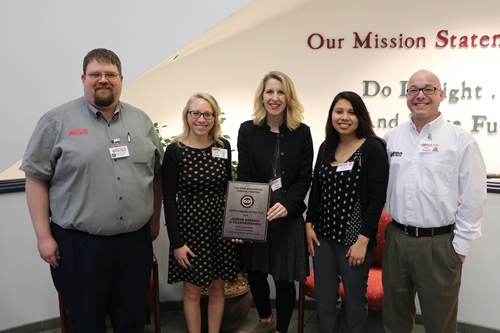